(Toronto, Ont.) Bo Hedges has a calm demeanor and quiet confidence on the basketball court. A co-captain on the Canadian Men’s National Wheelchair Basketball Team and a three-time Paralympian, Hedges navigates the highs and lows of the game with level-headed composure.

With the world being turned upside down by the coronavirus pandemic, Hedges maintains that unwavering fortitude despite an enormity of uncertainty on and off the field of play.

“I’m trying not to be too focused on what has been kind of taken away, versus just focusing more on finding solutions and thinking about ways to help myself and the team through a lot of it,” said Hedges.

It’s been a whirlwind few weeks for Canadian athletes. All wheelchair basketball programming in Canada was suspended. Then Team Canada backed out of the Olympic and Paralympic Games and called for a postponement before the international governing bodies of Tokyo 2020 officially postponed everything until the summer of 2021.

“Morale within the team is good,” said Hedges in spite of the current situation. “We’ve been connecting in different groups and watching video online to keep our minds on basketball but also stay connected. Everyone is chatting, reaching out to one another and has been supporting one another through these past few weeks.”

There are understandably mixed emotions with the Paralympics being bumped by a year – the Games are now set for August 24 to September 5, 2021 – given all the time and energy that has been invested by everyone to date.

“The postponement happening now alleviates some of the pressure, worry and potential stress of trying to train,” said Hedges. “But because it happened so quickly, there’s really no plan in place.

“There is still that opportunity to play in the Games 17 months from now. We’re going back to the drawing board right now on how to prepare for a Games that far out.”

As a high-performance athlete accustomed to being on the basketball court two to three times a day with easy access to a state-of-the-art gym, the current standstill is a big adjustment.

“Our schedule before was basically like a work day,” said Hedges. “You’d get up and get to the gym and by the time you get home you’ve put in a six to eight-hour day and then you do your recovery and stretching after that. Whereas now there’s a lot of time to try and fill and try and keep your mind active.

“That is one of the challenges for sure. Our integrated support team and our program are trying to support us as best as possible, but in the end, there is only so much you can do in your apartment.”

Hedges is maintaining his rehab and prehab training regimen from home along with some basic exercises to keep up his strength. He’s been in self-isolation for two weeks after returning from a tournament in the U.S. in mid-March, and is looking forward to getting back outside to add some more activity into the equation (while physically distancing, of course). 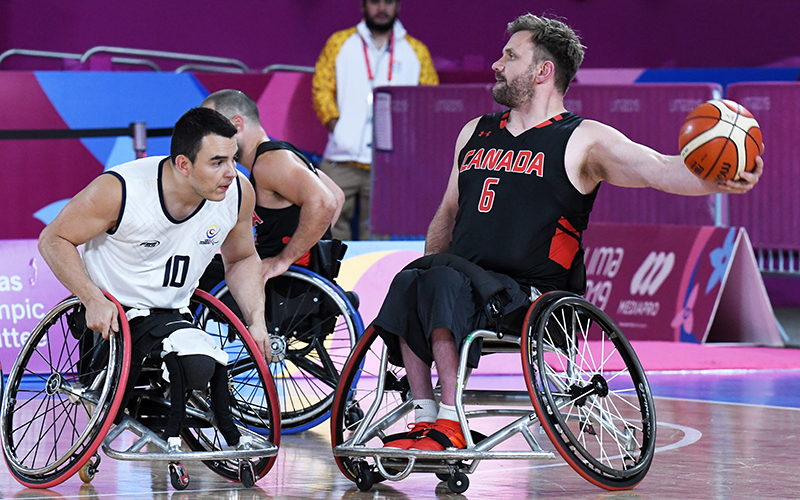 While Hedges lives in Toronto to train full-time at the Wheelchair Basketball Canada National Training Centre, for him home is at the family ranch in Fort St. John, B.C. He’s contemplating making the long drive out west while basketball is on the backburner to help out his parents on the ranch.

In the meantime, he’s doing his best to stay connected, and keep his mind busy while isolated in the city amid all of the stress and uncertainty caused by the coronavirus. That includes some video game action and the latest season of Ozark on Netflix.

“I’m trying to talk to friends and family and connect with people around the world as well to see how everyone is doing. So that’s a huge part of what I’ve been trying to do in that sense, with teammates too.

“I think it’s extremely important to find a balance between things. Fortunately for me I’m involved in a bunch of different board of director and athlete representative roles. I have a fair amount of emails, probably more than I typically would, coming in. So, there’s a lot of stuff to have conversations around, review documents and challenge myself mentally and keep thinking about a lot of different things that way.”

Hedges is flexing his administrative muscles as the chair of the board for the BC Wheelchair Basketball Society (BCWBS), a board member for AthletesCAN – the association of Canada’s national team athletes – and as an athlete representative for the Canadian Men’s National Team with Wheelchair Basketball Canada.

“With BCWBS, that hits close to my roots because I grew up playing through the B.C. system and grew up in northern British Columbia, so I’m trying to make sure that there are opportunities for people with disabilities, not just in the Lower Mainland, but throughout the province.”

Hedges has been involved with AthletesCAN for just over 10 years, and joined its board of directors roughly three years ago.

“I had been to AthletesCAN forum events in the past and I really enjoyed it and was inspired by what the organization does. About three years ago, I went to another forum with the mindset of running for the board. I felt like it was that time in my career to do a little bit more and be more of a voice for parasport representation at that level and also get a better understanding of the landscape of sport in Canada and make sure that athletes’ voices are heard.”

At the board level, his focus is on supporting athletes through this time and trying to make contingency plans moving forward within a rapidly evolving landscape. As an athlete, he’s hopeful that part of Team Canada’s summer plans can be salvaged once humanity perseveres through the current crisis.

“I think it would be good for all of us at some point this summer to have some sort of training camp or maybe centralization. Obviously when that’s going to happen and how that looks, nobody really knows at this point because we’re so far from that happening right now.

“But I think it would be good for all of us mentally, as well as physically, to get together and have a bit of time to move forward from there.”