Road to Rio: The Countdown Begins

We’re checking in with our Canadian athletes as they prepare to strive for excellence at the pinnacle of Paralympic sport. This is their Road to Rio.

September marked the one-year countdown until the start of the Rio 2016 Paralympic Summer Games. It also marked the return to training for Canada’s top wheelchair basketball athletes after a very short ‘off-season’.

Both the Canadian Men’s and Women’s National Wheelchair Basketball Teams punched their tickets to Rio 2016 in mid-August courtesy of silver medal performances on home soil at the Toronto 2015 Parapan Am Games.

After a few, short weeks off for rest and recovery, the athletes are back on court to begin the next chapter in their journey towards Rio. Training at the National Academy is back in full swing and those athletes scattered around the globe are gearing up for a new season with their respective club teams. 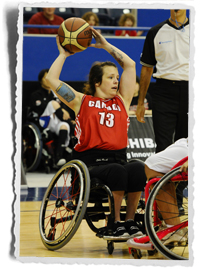 “I have been training! We only had two weeks (ish) off and I spent my off time with my beautiful family, I fished, I kayaked and then jumped right back into training,” said Team Canada player Jamey Jewells.

Jewells trains full-time at the National Academy alongside 23 of the nation’s top developing players, including current and future National Team athletes.

In some cases, the drive to be at the top at Rio 2016 even meant relocating. Senior Men’s National Team player Nik Goncin is just one of several athletes to move to a new home in pursuit of Paralympic excellence.

Almost completely moved in to Toronto finally, the move has been a tiring one but hopefully it pays off! #TeamCanada #RoadToRio — Nik Goncin (@goncin) September 11, 2015 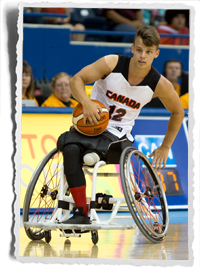 “Most of our team is centralized (at the Academy in Toronto) so I believe our chemistry as a team will grow substantially,” said Goncin. “The centre is state-of-the-art and the amount of resources that are available to us is exponentially larger than most programs across the world. I am very excited to access all of these resources and become the Team Canada we know we can be.”

The Canadian athletes and coaches are busy setting personal and team goals and putting plans in motion to get them where they want to be physically and mentally for next summer.

“I have set some goals for Rio 2016. Life balance; I think it’s important to take care of your green zone (life outside of basketball) in order to be able to be 100 per cent cognitively engaged when I am away training and playing,” said Jewells.

“I am working on my shot. I think it’s important to always get better,” she said. “I put work into my shot last season at the Academy and I will continue to work on it. I want to be able to contribute in an offensive manner. I also am working on my fitness for Rio. Canada plays a fierce, fast-paced, up all the time, aggressive, team style of play. I want this to be the best year yet. I want to do everything in my control to help Canada get back on the podium where we belong.”

“Canada plays a fierce, fast-paced, up all the time, aggressive, team style of play. I want this to be the best year yet.”

While a podium finish in Rio is the ultimate goal, Jewells also knows that she and her teammates must focus on the process and not the outcome. That journey has already begun.

“For me personally, after this last season and leading into this season, I have learned you need to love the process in order to become great,” she said. “I am taking that with me every day until September 2016!”