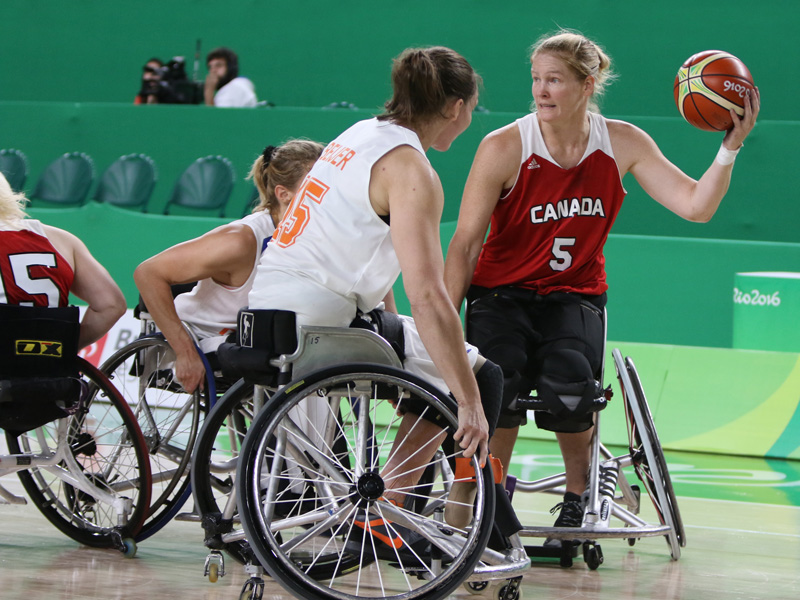 (Rio de Janeiro) The Canadian women’s Paralympic wheelchair basketball team fell to the Netherlands 78-60 in a heart-breaking loss in the quarter-finals at the Rio 2016 Paralympic Games on Tuesday at the Rio Olympic Arena.

“Both teams played really well but sometimes some shots fall and some don’t,” said Canada co-captain Janet McLachlan, of Vancouver, B.C. “The Netherlands played very well but I felt like we did too. We left everything on the court and we can be incredibly proud of that. Unfortunately they get the win at the end of the day, but we still have a game left to play so we have to keep our heads up and move on.

“This team, we’ve been through a lot of in the last few years and we’ve really come together in the last few months. I couldn’t be prouder of this group of girls and they mean so much to me right now. Everyone is keeping each other going, being positive with one another and giving to each other and that feeling is pretty spectacular.”

Cindy Ouellet (Quebec City, Que.) led the Canadian side with 20 points, followed by McLachlan with 18 points and 11 rebounds for the double-double. Rosalie Lalonde (Saint-Clet, Que.) had nine points while Katie Harnock (Elmira, Ont.) had eight points for Canada.

Mariska Beijer had a double-double for the Netherlands with 31 points and 14 rebounds, and teammate Inge Huitzing added 17 points.

Both teams came out firing to start the game in a back-and-forth opening quarter that featured multiple lead changes. Canada started strong to go ahead 10-5 early but the Netherlands clawed back and managed to hold on for a one-point lead, 19-18, after the opening quarter. The Netherlands began to dominate the boards in the second frame, making the most of second chance opportunities down low to widen the gap and take a 42-29 lead into halftime.

Canada began to chip away at the deficit in the dying minutes of the third quarter but Netherlands responded late in the frame to keep Canada at bay, including a late two-pointer that beat the buzzer, to take a 60-49 lead going into the fourth quarter. Canada battled until the very end but the Netherlands kept the pedal down in the final frame en route to the win and a berth in the semifinals.