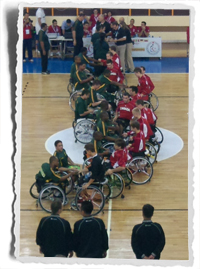 “We are very proud of our team’s performance today. Three of our guys played in their very first international games including Jack and Liam who scored their first-ever international baskets. Our young guys were supported tremendously by the great leadership of our three returning players.” said team Canada head coach Steve Bialowas.

Playing in his second World Junior Championship, Nik Goncin, of Regina, Sask. notched a double-double and led all players in three categories with 25 points, 10 rebounds, and 7 assists. Returning veterans and twin brothers Jonathan and Phillippe Vermette, of Sherbrooke, Que. pitched in with 3 points and 10 rebounds, and 5 points, 4 rebounds and 1 assist respectively.

Vincent Dallaire, of Quebec City, Que. was Canada’s hottest shooter making four-out-of-five of his shots (80%) from the field to finish with 8 points, 3 rebounds, and an assist. When the dust settled 10-out-of-12 players found their way onto the score sheet for Canada.

The World Junior Championship is held every four years and Canada is one of twelve countries competing for the world title in Adana, Turkey, September 7-14, 2013. Canada has the added incentive of potentially becoming the only team in history to win the tournament three times. The inaugural Junior World Championship was held in Toronto in 1997 and Canada went on to win the first two tournaments (1997 and 2001).

Team Canada will now look to carry the momentum into their second game against Great Britain September 8 at 9:45am E.T.